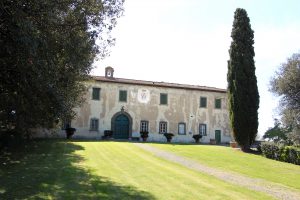 The Villa of Spedaletto (Lajatico) was one of the Ville of Lorenzo the Magnificent, he made it rebuild and he often stayed there. Although it was ceded after his death, it is one of the Medici’s villa.

Spedaletto is named for “spedale” of hospitalier knight of Altopascio situated in the surroundings of Via Francigena. This “spedale dei Santi ippolito e Cassiano” was granted to Lorenzo the Magnificent in 1486.

The zone was strategic for i Medici, because Volterra was conquered for his precious cave in 1472. In the vicinity of it there are hot springs of Bagno a Morba, the mother of Lorenzo has rented them. The family’s main branch of Medici suffered illnesses to the gout. Numerous were the sojourns of Lorenzo since one year before his die in 1492.

The farm of Spedaletto included twenty estate and it was reorganized by Lorenzo. The transformation to “casa da signore” of the main building was done between the 1487 and 1491.

The project seems it is connected to Simone del Pollaiolo dubbed “Cronaca”, he stayed at Spedaletto in 1490. But the villa had a easy structure, the magnificent was given by the plan of pictorial decorations with the Florentine painters who they were employed to the realizations of frescos, but today these frescos are lost. The mayor loggia and the salon, according to Giorgio Vasari, Filippino Lippi, Pietro Perugino e Sandro Botticelli had worked on it. The unique description more detailed reached to us was the pictorial cycle of Ghirlandaio.

After the death of Lorenzo in 1492 the villa was sold by his son “Piero il Fatuo” to Franceschetto Cybo in 1494. Then it followed the fates of the family since 1606, when Alberico I Cybo-Malaspina sold it to senator Bartolomeo Corsini. The Corsini are the actual owner of villa, their emblem stand out on the facade of building.

Unfortunately in XVII century the frescos were damaged by blaze. Today we have only scarce traces of them.