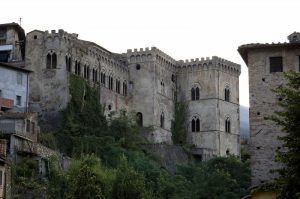 Tonini’s Castle is one the most ancient residential nucleus of Buti, it appear in X century. At the beginning existed only a fortify tower of sighting, it occupied the north part of hamlet. Then the citizens began to build the first houses along the road and in consequence of it, they realized that they have to build new defensive. The structure had three towers that controlled all the access, one is still visible along the street Marianini. During the wars between Pisa, Lucca and Firenze, Tonini’s castle was place of clash and it has suffered lot of devastitions.

When Buti wasn’t any more under the Florentine control, it was started a rebuild phase on the basis of new Reinaissance parameters. The castle Schiavini Cassi was built in 1628 by Tonini’s family, and it kept her structure since the first years of 1900 when following a restoration it assumes the typical aspect of a medieval castle with the towers, merlatura and double-arched windows.

Tonini’s castle is a fortification that control and protected the ancient hamlet of Buti and it’s still present the access door of hamlet. The castle be subjected to a restoration in the first years of 1900, when his massive bulk were detached the gothic double-arched windows.

The ancient district keep again the numerous road and buildings that reminds to the ancient and medieval atmosphere.