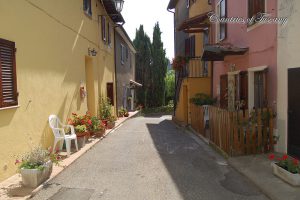 Montechiari is far 9 km from the administrative center, it is far 40 km from Pisa.

The territory proves that it was inhabited in Etruscan era. some discoveries prove the presence of an important settlement along the road between Montechiari and Montacchita, the road constituted an important transport route between Pisa and Volterra. Rests of archeological industries were found in the neighborhood of Montechiari. The majority of industries were used for the production of bricks, in other words furnaces documented in mid-medieval and the modern era, they were situated near the master’s villa, they were built for the construction of villa and they were kept for the maintenance of villa.

The hamlet was founded in medieval era like castle. In 1362 it was set on fire and destroyed. It wasn’t rebuilded, inasmuch neither Targioni Tozzetti nor Repetti reported in their books the existence of that castle. Today there is only the majestic villa of Montechiari with her tower, it is located in the highest part of hamlet.