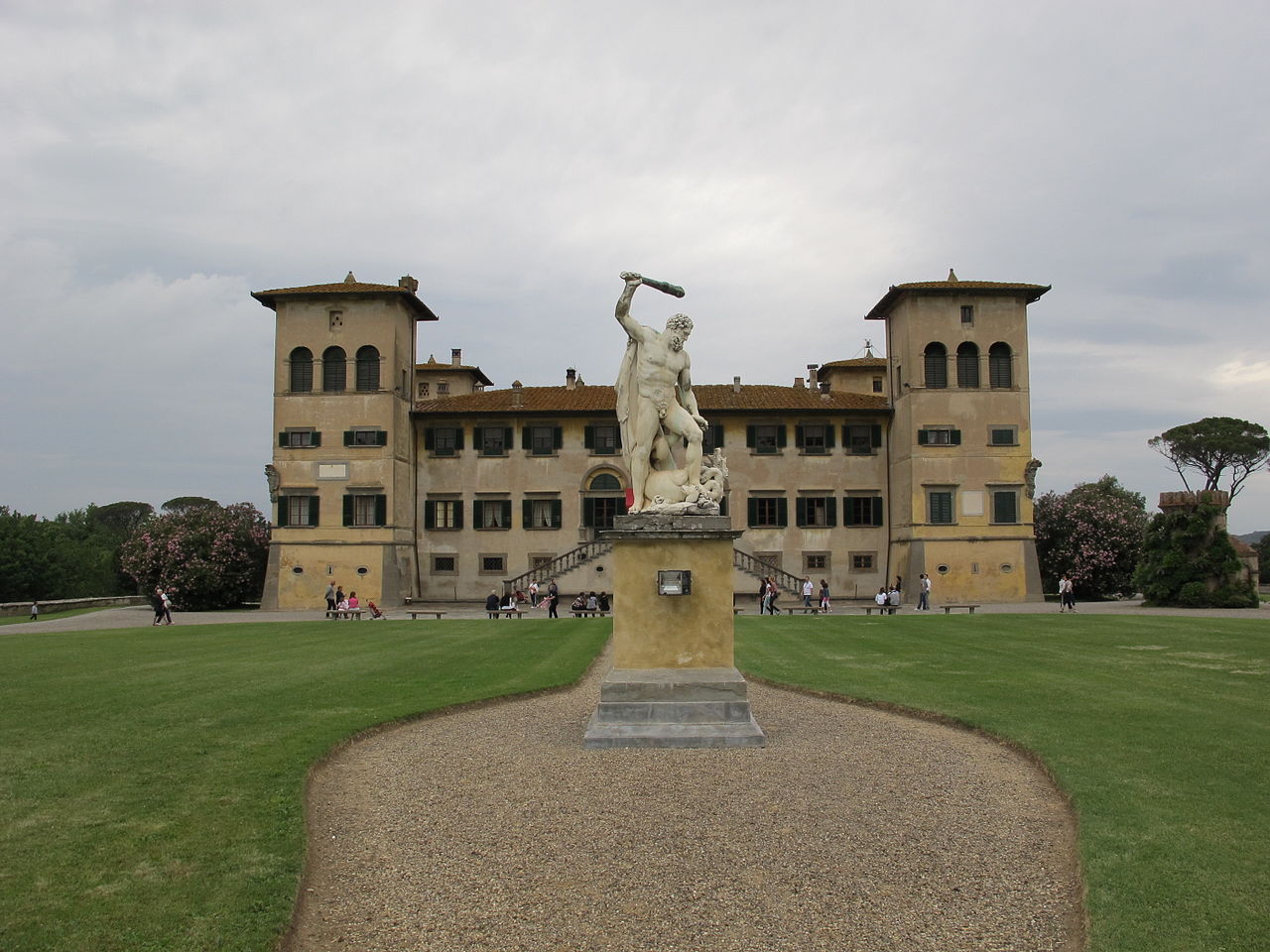 The area, at the base of an hilly area between the valleys of the Era and the Cascina, was chosen by Duke Alessandro de ‘Mediciper to create a grand dwelling in the center of an extensive estate. The area also had a strategic role because the Medici’s interests were increasingly turning towards the Pisan plain, with a policy of expansion to the sea that was followed by subsequent granducs.

The villa is set in a scenic location at the end of a cypress avenue and dominates, with its compact cubic structure and the four mighty corner towers, the surrounding area.

The villa is very much reminded of a fortified structure, with the bases of raised towers (“scarpatura”) and reinforced corners, while the front yard, on which the villa rises majestically, was created to gather on occasion a square of arms .

This lawn, in which stands the sixteenth-century statue of the Edolo killing the Hydra, by Giovanni Bandini, is delimited by two symmetrical factory bodies, used as stables and barracks.

The military use of the villas became necessary after the anti-Semitic insurrections of Pisa and Valdarno, against which the villas of Camugliano were built, and later the twin Villa Medicea dell’Ambrogiana in Montelupo Fiorentino.

In the second half of the sixteenth century Cosimo I donated Camugliano’s villa to Giuliano Gondi for the services rendered to the Medici family. Subsequently it was given to Matteo Botti who, after having been invested in the title of Marquis of Campiglia d’Orcia by Cosimo II, returned it to the Grand Duke with an act dated 25 December 1615.

On September 23, 1637, the doctors in the person of Grand Duke Ferdinand II finally gave up the villa and the estate of Camugliano, selling it to Senator Filippo Niccolini, who at the same time was also nominated Marquis of Camugliano and Ponsacco.

The Niccolini family made some modifications to the original structure, such as the double ramp staircase that connects the façade and loggia to the first floor with the front yard. Later the loggia was closed by large windows, while the surrounding park was arranged according to the dominant English style. In front of the villa was created a scenic elliptical hedge trimming decorated with marble busts, which still embraces the square.

The villa is still privately owned and it can not be visited.

The estate also belongs to the oratory of San Filippo.