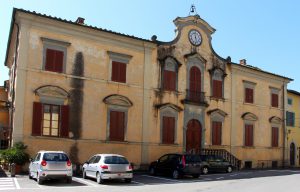 Now the Villa masi is private, the villa Masi is along the road that conduce from Capannoli to Santo Pietro Belvedere.

The villa is registered in the valuation of Capannoli in 1580 as property of the noble Florentine Berzighell’s family, and it constitute the most remarkable building of a village that developed between XVI and XVII century. The villa own the annexed chapel of Annunziat’, it was realized by the architect Felice Palma.

AT the begging of 1600 the farm was transformed into villa. The aspect of the actual villa is the result of restoration ordered by Francesco Del Rosso and it was done by the Pisan architect Niccolò Stassi. To him the exaltation is owned by the central part of front, it is remarked by the vertical tendency by lesene and by finial with the clock, it remember the internal front of Certosa di Calci. The chapel have a central symmetry in the project, it remind various Renaissance architectural typologies. The altar as Filippo Baldinucci remember, it house a bas relief  designed by the famous sculptor Desiderio da Settignano, it describe the Beata Vergine con nostro Signore e l’arcangelo Gabriele.

You have to see the roman sarcophagus under the portico and there is also a bas relief of marble on the front of chapel. Inside of it there are statues in terracotta attributed to “Cieco di Gambassi” and one copy of the Greek statue called dell’Arrotino.