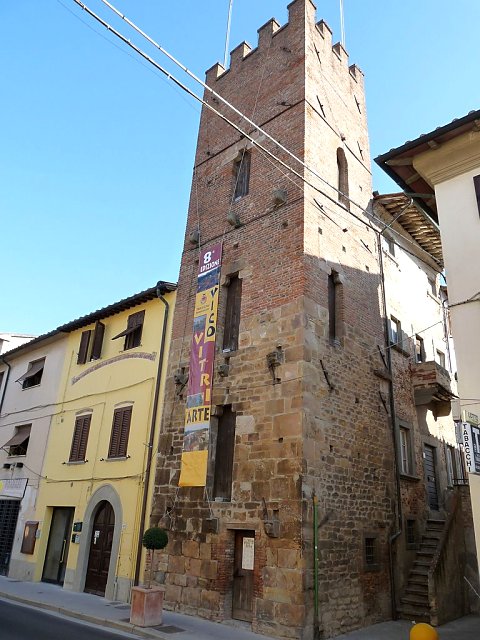 This tower is the most emblematic monument of Calcinaia’s old town and the oldest evidence of the ancient castle that is still visible today.

The building dates back to the first half of the thirteenth century. It was originally owned by the Upezzinghi, which was the town’s feudal family from the 10th to the end of the 13th century. Some of the most illustrious sons of the family were born here in Calcinaia, including: Uguccionella, the mother of Count Ugolino mentioned in Dante’s Divine Comedy.

The building has a rectangular plan and was built with blocks of sandstone and verrucana. After the construction of the new city walls (1287) commissioned by the Republic of Pisa and the subsequent expulsion of the Upezzinghi family (ca. 1290), the building became public property and it became the residence of the captain, an officer with civil and criminal jurisdiction over the castle.

The building, along with the house next door, functioned as a seat of power until the middle of the fifteenth century when the Republic of Florence, which had conquered Pisa and its territories in 1406, ordered that the building should be sold to private owners.

The monument was bought by the city in 1921 and the restoration work, which was finished on 22nd January 1924, led to the replacement of some interior floors, the consolidation of the structure and the addition of the battlements that made the tower reach its current height of 18 meters. After suffering damage in World War II, the tower was restored in 1999 and converted into a museum.