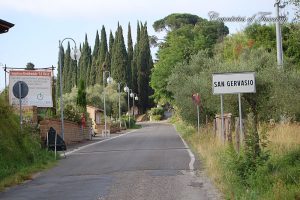 San Gervasio is an hamlet of the community of Palaia, it is part of the province of Pisa.

Even today San Gervasio show the medieval structure of the hamlet.

With regard to the ecclesiastical jurisdiction, it belonged to Lucca, since the 1622 when the parish church and the territory was annexed by the diocese of San Miniato. During the 1700s, the castle was transformed to a farm Villa, it achieve a full prosperity and an excellent industriousness in the mid-1800s until the first decade of 1900s.

The ownership switched to Montano’s family.It started a progressive decline of the castle and than it culminated in the past century. Since the 1960s, the estate and the entire business territory belong to Tommasini’s family.