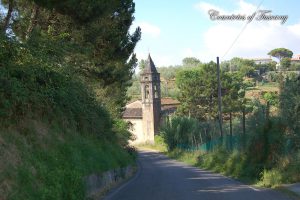 Montacchita is far 8 km from the administrative center of Palaia, and it is far 40 km from Pisa.

The territory of Montacchita results already inhabited in Etruscan era. Montacchita born as castle district during the high medieval, on the top of the hill was situated the stronghold, in the successive years it was fortified into villa.

It was property of the Bianconi’s family of Pisa, it is documented since the end of XVIII century. Giovanni Targioni Tozzetti, in its Relazioni d’alcuni viaggi fatti in diverse parti della Toscana, he describe it like a «little castle de’ signori Bianconi di Pisa, the villa include the ancient cassero. The castle and this villa are situated in a very high peak, and they benefit of clean air with a very ample view». The villa with cassero will be demolished in the successive decade , in 1839 Repetti reported the testimony of the missing castle.