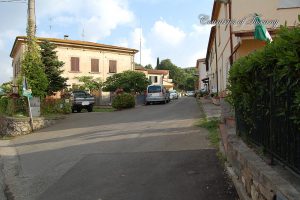 Baccanella(Palaia) appear in a land of Valdera, at the mid-road between Forcoli and Montanelli, down the hill of Alica. The place was known for the presence of sulphurous vinegary waters, they are very utilize for the care of rheumatisms.

The hamlet is far 7 km from the administrative center and it is far 40 km from Pisa.

The hamlet was known in the medieval era for the presence of Bagno a Baccanella, puddle of  cold sulphurous waters. The waters were described by Giovanni Targioni Tozzetti in his Relazioni d’alcuni viaggi fatti in diverse parti della Toscana of 1751, he has documented the presence of a little lake, it called “pozza”, it was very used for the care of various pathologies: in the same way the doctor Andrea Vaccà Berlinghieri was usual to use the waters for the care of skin diseas, rheumatism and arthritis. The original nucleus of the hamlet lead back to the presence of a tavern, a dive from which the place name. Thanks to the church construction in XVII century, the hamlet started to develop since to the modern era, it became a rural hamlet.