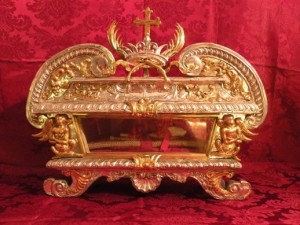 Museum della Pieve of Bientina was opened in 1993, includes a large quantity of holy vessels made of noble metal and dating back to the period between the 16th and the 19th century.

The Museum encloses works of art of great value that are part of the treasure of the church of S. Maria Assunta and of S. Valentine. Most of the treasure is composed of candle holders, goblets, incense burners, monstrances, reliquaries, trays and lamps produced by the most famous silversmiths of the Lucca, Pisa and Florentine schools of the 17th and 18th century.Most of these holy vessels were donated to the Church after the arrival in Bientina of S. Valentine’s reliquaries.

The museum offers a valuable display of vestments that can be dated back to the period between the end of the 16th and the end of the 18th century. Highly valuable and of fine workmanship, these vestments are of considerable artistic and historical interest.

Opening Time: by reservation only